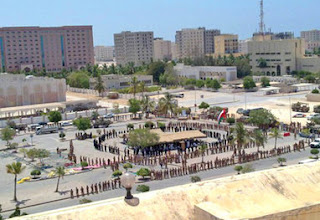 Just after 8pm on Thursday, security personnel blocked the highway and main streets in Salalah while army personnel carriers blocked all roads leading to ‘Freedom Square’. Helicopters were seen hovering over the square and with all communication services shut down at the same time, residents of Salalah took to the streets in an effort to find out what was going on.
.
A statement was issued by Oman’s official news agency ONA on behalf of a ‘security source’ on Thursday evening soon after the operation began: ‘A security source stated that the security and military forces arrested a number of instigators in the governorate of Muscat and the wilayat of Salalah, who were in charge of instigating the public to riot and break public order in a way that forced the authorities to take action.
This was to deter them from transgressing the country's law and their endeavours to spread sedition and their demands which are irrelevant to public interest.’
.
A large number of Salalah residents had abandoned their cars in the middle of the roads on Thursday night to try and reach the protest square on foot. However the army had cordoned off the entire area and no one could get in or out until almost three hours later. Telecom services were back online two hours after the operation began.
h
The first move by the army personnel was to break up the sit-in that has been going on in front of the governor’s office in Salalah since February 25. The protesters were loaded onto buses and taken to the Royal Air Force base. As per reports, the main organisers were taken to Muscat.
After midnight on Thursday, angry supporters pushed past the riot police into the square and started another sit-in demanding the release of their friends.
.
Friday morning saw more arrests when just before noon the army closed in on the sit-in and arrested the gathered people. Things got out of hand after the Friday prayers, when protesters clashed with the army on Al Nahda street by the governor’s office. There were incidents of rock-throwing at the army and tear gas was subsequently used to break up the crowd.
j
Though they dispersed for a while, soon they were back again marching up to the army and this time bullets were fired into the air as warning. A senior security official also came to speak to the protesters over a microphone in Jebbali in an effort to calm them down.
.
Sources in Salalah say that most of those arrested on Thursday night were released on Friday, barring a few of the main protesters. Of those released, some have returned from the airbase while a few chose to remain at the base demanding the release of their friends.
,
However with the protesters refusing to back down, a fresh spate of arrests happened early on Friday evening, with around five busloads of the arrested protesters being taken to Arzat jail in Salalah. Among those arrested is Abu Abdullah (online name) who has been running the Oman Protest discussions on Facebook since March. Sporadic clashes continued well into Friday night and at the time of going to press.
.
Published - Muscat Daily - 14/05/2011
By Susan

Susan
Salalah, Dhofar, Oman
I am a blogger and newspaper columnist (Muscat Daily) from Dhofar, the southern region of Oman. Recently, I became a McGill Echenberg Human Rights Fellow. Most of my work has revolved around women's issues, human rights, and the south of Oman. I am currently pursuing a post-graduate degree in leadership studies from the University of Glasgow. I'm also a HR professional in the private sector. I enjoy reading, photography, travel, baking, cats, and coffee. You may contact me at susan.alshahri(at)gmail.com

Thanks for stopping by!